I Have Never Gone to a Funeral Like Today's

Many knew Andy much better than I did, but as I said I played poker in his basement on many occasions and tailgated with him on Saturday afternoons. By the way, he was a pretty damn good card player. Maybe that is why ten days ago when I beat him out on a flush draw it would have never dawned on me that he was in a very dark place. He had a good poker face. I have spent the better part of the last three days trying to understand why a guy that had it all (A beautiful wife, two great young boys, an unbelievable house and a dream job as the Fire Chief in his hometown) could make that choice. At different times I have been pissed, sad, and in disbelief. It has honestly been very upsetting. The answer is that it is not for me to understand and it isn’t going to bring him back. That is just a cold hard fact so I need to move on from it.

The thing I do think about is the impact Andy had in this community and beyond. He wasn’t just a husband, dad, son, and uncle---he was a coach, colleague, and friend to countless many. You need not have gone any further than the visitation at the Fire House or the funeral today to understand. What I have witnessed is that guys, that were in or around his age who either worked with him or were his friends, seem to be doing some personal inventory of their own lives. I think it is easy in this day and age of social media to think everyone else leads these perfect, flawless lives. Everyone posts the best versions of themselves on Facebook or Twitter and all the while may very well be going through some pain staking struggle that no one knows anything about. I think men in particular are extremely guilty of this----maybe it is because we are too competitive and don’t want to be losing in the “race” of life. Maybe we think we can solve it on our own (like in the old days before GPS when we wouldn’t stop and ask for directions). Maybe it is because we are emotionally closed off. Who knows what it is that makes us this way. Then something like this happens and a giant alarm bell is sounded deep in our souls.

The real truth is that most people walking this earth carry great burdens. Some people share them while others keep them concealed. We ask people every day how they are doing and most of the time we get a canned response of “I am fine”. I am sure a lot of the time we are not even listening for the answer since it is so common place. But we are not always fine. The struggle is often all too real and the weight is heavy. But because of culture or custom we don’t seem to be doing as well as we should at opening up and listening. I do know we have to get better.

I won’t even pretend to know what was going on in Andy’s mind at the end but I know he must have been in a pretty dark place that most of us can’t even imagine. I have a Master’s Degree in Counseling and I thought he was fine ten days ago. So I want to apologize to those folks in my own life that I am not paying more attention to on a daily basis. I will try to get my head out of my phone and do better. Know this—I Love You---just as I am sure in my heart that Andy loved his friends and family deeply.

I hope that the good that comes from all of this is that we start opening up when we are in a bad spot and ask for a little help from a friend or family member. Let’s quit being embarrassed to ask for some support. I hope we slow life down some and stop to smell the roses. Life is fleeting so we need to get busy living and looking out for one another. If the last couple of days is indicative I think we are off to a good start. I have rarely seen friends, family, and community come together in such a demonstrative fashion. I don’t know if Andy accomplished everything on his bucket list (The Cubs will probably take care of one of the big ones in the next month) but I do know that he had a tremendous impact in his community. No one can take that away. I hope he keeps a seat warm for us at the Big Poker Table in the sky and I hope he finds that Royal Flush.

I have never gone to a funeral like today's--- and it was as grand a sendoff as anyone could ever hope for---but it will be too soon if I ever have to go to another like it. Rest in Peace Andy. 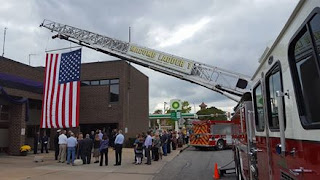