There was an empty seat at lunch today

May 06, 2016
There was an empty seat at the table for lunch today. For a number of years now each May a luncheon is put on by Western Illinois University honoring our top student leader on campus.  It is named after William E. Brattain, or as most of us know him, Dr.B. It is one of my favorite events I get to attend each year. I know Dr. Brattain loved it too. Every year he would get up and extol the joys of being a proud member of the Western Illinois University community. His love for this place could not be any more evident than in his annual speech to the student recipient and the audience lucky enough to have secured an invitation.

The lunch is always held in the University Union, which is a building that basically served as a second home to Dr.B. The staff and students within it were like extended members of his family. He was nationally recognized for practically writing the book on University Unions, but more importantly than that he made a significant difference by meaningfully impacting thousands of student’s lives over his career. Whether it was supporting the Performing Arts while bringing big name acts to campus or supporting WIU students in the Office of Student Activities organizations he was all about it.

The list of recipients of this award over the years is a virtual “Who’s Who” of Western Illinois University success stories. The honor is the most prestigious a student can receive. Those on the plaque over the years are all highly involved, academically squared away, and have an incredible passion for their fellow students. Most importantly, they are true to their school and campus community. I think later in life there is not much that made Dr.B more proud (outside his family) than coming on campus and giving this award away. (Though a close second might have been getting to be the permanent driver of the President in the annual Homecoming parade with his convertible). He truly did love this place.

As many know, the last nine months was the ultimate series of highs and lows with Dr. Brattain. It was truly a great day this past fall when a huge crowd of alumni and campus community gathered to witness the ceremony officially naming the lounge housing the Wall of Honor after him. It was conversely devastating when the call came that he was called home right before Christmas. Leaving a gap that can never truly be replaced here in Macomb and at WIU. Though through the lounge bearing his name, the students and staff he touched, as well as this awards lunch, his legacy will continue on for many lifetimes.

So in that memory, today we honored a very deserving young lady with an impressive list of accomplishments named Vanessa Redpath, who will no doubt be unbelievably successful in any endeavor she chooses moving forward. As I was sitting there today I couldn’t help but think that he was upstairs smiling as he watched. A nice hearty lunch of steak, potatoes, green beans, and fresh strawberry shortcake in homage to the county boy he was at heart. A heartfelt address by the President, who was also his dear friend, and a student that represents the very best of WIU in the future, receiving the award named after a great man whose accomplishments and spirit represented everything great about Western’s past. The two sharing something very special in common----they both bleed purple and each has a heart of gold.

I know he was saying under his breath—“You picked a good one”. Probably handing out WIU pennants to anyone he could get to take one. It is a perfect sunny spring day here in Macomb today (perfect for a ride in his convertible). I have no doubt that he is responsible for that request being taken care of as well. Everything just as it should be. The bells in Sherman Hall are ringing today because another angel got his wings today.  It was an incredibly touching ceremony with Dr. Brattain’s wife, daughter and granddaughter in attendance to continue their on-going support to the award, the student receiving it, and the legacy of a legend. But…….there was an empty seat at the table for lunch today. 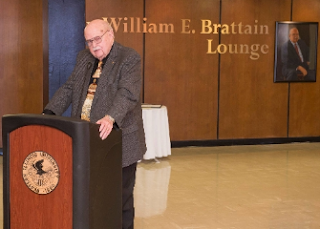