June 30, 2017
Tomorrow morning Higgins Hall will cast a shadow for the last time on the skyline of Western Illinois University’s west side of campus. After standing tall for fifty years as the tallest building in McDonough County, it is time to lay her to rest after a life served well.  Built in 1967, Higgins was made to hold 1200 residents with twenty floors including a penthouse dining hall on the nineteenth floor. Tens of thousands of students and fifty years later it will get its “Last Call” when the bell tolls nine in the morning.

When Higgins opened its doors Lyndon Johnson was the Time “Man of the Year’.  Songs like Aretha Franklin’s “Respect”, “To Sir with Love” by Lulu, and “The Letter” by the Box Tops were topping the Billboard charts. “The Graduate”, “Cool Hand Luke”, and the “Dirty Dozen” were popular at the movies. Doritos made its entrance onto the world stage. “Andy Griffin”, “The Lucy Show”, and “Gunsmoke” were smash television hits. Civil unrest wasn’t far away in 1968 with assassinations of Dr. King and Bobby Kennedy. Higgins certainly started off with a bang and fittingly tomorrow will end with one.

On the eve of its destruction I am reminded that they don’t build them like Higgins anymore. When it was erected it was a towering sky scrapper on the prairie. A monstrosity of a building that housed more students than the population of many surrounding towns in such a rural setting. It had all the latest amenities of its time, as well as the colors associated with that era (you know what I am talking about). It created quite the buzz---- but the world is moving so damn fast now that, in its later years, it was considered out of date for all intents and purposes. Today’s students live in residence halls (not dormitories). They are built much closer to the ground for efficiencies sake and have all the latest bells and whistles craved by this generation. Students desire suites and private bathrooms and demand the latest technology and Wi-Fi capabilities to power all the devices that operate their daily lives.

When Higgins was born there were house phones instead of cell phones. Residents gathered in the lounge for various community events instead of being tethered together though social media. Television sets were a luxury, not an expectation. Those televisions had three channels not three hundred. They ate together as a floor in the dining room (and had food fights) instead of getting take out and going back to their single room. There were panty raids and various other shenanigans. There was streaking and curfews and dress codes. Things today we would never dream of dealing with or implementing.

I have always thought residence halls are real, living, breathing things. They are not just four walls and a roof. Not just a place to eat and study. Higgins was certainly much more than those things. In its lifetime it gave birth to inspiration and dreams. It watched some of them shattered as well. It housed NFL teams and students. It started careers. People met their future spouses and forever friends. First loves were found. Some had their first drink there. They figured out what they wanted to do with their life (at least some did). Higgins gave us nurses, polices officers, fire fighters, teachers, and business leaders. It housed individuals that have gone on to tremendous successes over their course of their life. Students made foolish mistakes and learned from them. Sadly some even died there. Life and learning happen and the world is a better place for it.

When nine o’clock rolls around tomorrow we will hear several loud “booms” signaling Higgins Hall’s “Last Call”. Like a light flickering on and off at the end of the night in a downtown bar saying to us “You can’t stay here”. Those synchronized thunderous tones in our ears will be telling Higgins it is time to go home one final time.  But before that last “Big Bang’ it is important to take a moment and celebrate the memories and successes of everyone and everything that made Higgins alive for all these years. The laughter, tears, friends, family, and life changing experiences. That part can never be taken away from anyone ever associated with it.

When that final hour comes we will all be watching. Thousands here on campus and thousands more all over the world on the internet. In less than thirty seconds-- fifty years will coming crashing to the ground. Andrew Bocelli’s “Time to Say Goodbye” will be queued up on the speakers. Some will be crying, some will be drinking (some doing both), and most everyone will be remembering the Old Gray Lady that stood so tall for so long. That home away from home that meant so much to so many. She gave us community, fellowship, and another family. A building well lived in and well loved. A throwback to another time. A true classic. --------It’s “Last Call” Higgins and it’s time to go home.

Forever and forever, farewell. If we meet again, then we’ll smile indeed. If not, it’s true, this parting was well made.---Shakespeare- from Julius Caesar 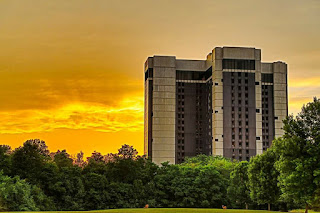