No Good Deed Goes Unpunished: A Case for Norine Hammond

March 07, 2018
No good deed goes unpunished. Norine Hammond’s punishment is getting “primaried” by her own party because she didn’t fall into lock step with the Governor this past summer when she voted her “district” and supported a budget that would stem the tide of starvation taking place in Higher Education across the state. She had little choice but to do so (as did her colleagues in other university towns)  since Western Illinois University is in the center of her district and has a tremendous economic and cultural impact on the region as a whole.

It never ceases to amaze me that voters pretend to want Representatives to vote their districts while using common sense and not always toeing the party line. Then you get someone that does just that and she is rewarded by having her pathway to re-election made more difficult. Worse yet, the guy they brought in to be at the end of the “Chicago Puppet Strings” doesn’t even invest in himself. Ninety-five percent of his campaign money has come from a Political Action Committee (PAC) north of I-80. Tactics no better than Mike Madigan would employ himself. Just more machine politics at work. Make no mistake, they have to make sure us downstate voters get in line-----because they know what is best for us up there in the city.

Mark Twain was once quoted that “There are Three Kinds of Lies: Lies, Damn Lies, and Statistics”. If I have to hear one more time that we were saddled with a 32% tax hike I think I will have to visit the emergency room for convulsive vomiting. I am absolutely sick of that number being manipulated and twisted around for political purposes. We were bumped by 1.2%. I don’t like taxes either but here is a newsflash---Illinois is broke and we can’t just cut our way out of it. Intelligent bi-partisan groups that have done exhaustive research can tell you we need to cut operating as well as generate revenue. Ironically, most people want neither.

If Mr. Griffith would have been in the same seat as Norine this past summer he, too, would have had to make the choice of choking off Higher Education (and education in general) across the state and permanently damaging the 93rd district ---or he could have stood on his pious moral high ground that he currently has the luxury to do never having been in the hot seat and delt a death blow to this region. There is a reason Republican Representatives from all the state universities crossed over. They had to because it was in the absolute best interest of their voters. Something he clearly has no care for, or understanding of whatsoever.

If folks want to be upset at Norine for making that vote you have every right as a citizen to feel that way, however if you are remotely impacted by Higher Education or K-12, for that matter, in this district then you should be thanking her profusely and voting for her on March 20 because we owe her a profound debt. A vote for Griffith is a vote for an outsider taking outsider money--- held by the puppet strings of Chicago establishment politicians. Norine has the courage of her convictions and she is a voice we can ill afford to lose in Springfield during these turbulent times. Norine stood up for us in a very dark hour. Now it’s our turn to return the favor---because clearly no good deed goes unpunished. 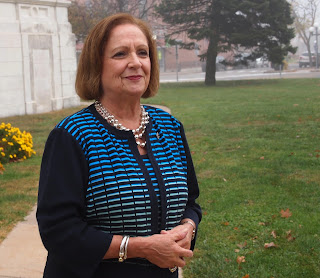 June 24, 2019
Last Thursday evening I had to make the painfully difficult decision to let Charlie go meet God. His last month has been a real struggle and in the end his organs were failing him. That happens with thirteen year old dogs. Maybe he just thought he needed to go be with Maddie up in Heaven after last Saturday since he knew she was always anxious about being alone. My heart is broken. It is devastating.
I remember when I first met Charlie four years ago. He was the barkiest dog in the kennel. He was “Cage Crazy”. He was also already nine years old –so he was well through the better part of his life already. Old dogs are not a big hit in shelters. Several weeks later Bonnie from the Humane Society asked if I would foster him as his time was up and they had exhausted all other avenues. He was the last of several dozen rescued from a hoarder situation that had not been picked. It was the absolute worst day possible for me to take him since Residence Hall opening was the next day. I agreed…
1 comment
Read more

Final Ride for a Princess

June 15, 2019
Last night when I got the phone call that we were going to have to say goodbye forever to Maddie I cried. Twelve years ago we saved her just moments before she was going to be put down. Her shelter name was Sally. I remember how incredibly happy we were. We had gone to go look at another dog and it just didn’t work out when we were told about this sweet girl that was in the very last kennel in the back. I remember how scared she was then. Her tail was tucked between her legs and she was anxious. She got a long with Max so we began our adventure together. It was one of the happiest days of my life.
Since then Maddie has been an integral part of our life. Anyone that owns dogs knows they are family. The funny part was I was the one that really wanted a second dog as a companion to Max but when we brought Maddie home she instantly formed and unbreakable bond with her human mom. They have been inseparable ever since.
Before getting old she loved play fighting with Max and swimming in t…
Post a Comment
Read more

December 24, 2019
It’s that time of year again. Welcome back for the Third Annual “Airing of the Grievances” blog. I am thankful to celebrate a holiday (Festivus) that allows for this tradition. Clearly one of the best things to come out of the Seinfeld television series. As always I will trying to stray away from the low hanging fruit of politics (as best I can). Additionally, to my colleagues in Higher Education---I hate to disappoint you this year because there is so much material, and our profession is very broken, but that blog will have to wait until retirement for my self-preservation. Time to get this party started.
Anyone that has not already blocked me or hid me as a friend on Facebook knows that I have slivered around the edges of my low patience when it comes to the Emotional Support Animal (ESA) phenomenon taking our nation by storm. Today I will make my loathe and disdain for the abuse of the current system (or lack thereof) "social media official" with this year’s first grieva…
Post a Comment
Read more