Last Thursday evening I had to make the painfully difficult decision to let Charlie go meet God. His last month has been a real struggle and in the end his organs were failing him. That happens with thirteen year old dogs. Maybe he just thought he needed to go be with Maddie up in Heaven after last Saturday since he knew she was always anxious about being alone. My heart is broken. It is devastating.

I remember when I first met Charlie four years ago. He was the barkiest dog in the kennel. He was “Cage Crazy”. He was also already nine years old –so he was well through the better part of his life already. Old dogs are not a big hit in shelters. Several weeks later Bonnie, from the Humane Society, asked if I would foster him as his time was up and they had exhausted all other avenues. He was the last of several dozen rescued from a hoarder situation that had not been picked. It was the absolute worst day possible for me to take him since Residence Hall opening was the next day. I agreed to do it as long as it was understood that this was a temporary solution. So I took him home. The next morning I told Charlie that if he didn’t tear anything up or have any accidents in the house I would keep him. When I got back at the end of the day I don’t think he had probably moved off the porch chair all the whole time, and that is how it all started.

Charlie was more than a dog to me—he was a roommate. He came at point in my life that I was lonely and a little broken, which he probably could empathize with being in that concrete cage for seventy five days. He acclimated to freedom pretty quickly. When you get a dog, you often times have to make a lot of alterations to your life to accommodate their needs. It was almost the opposite with Charlie. I had to make very few adjustments, and the ones I did have to make were healthy for me.

He was able to do lots of things in our short time together. He was a “shopper” for a Macomb Chamber of Commerce promotion. He rang bells with the Humane Society for the Salvation Army at Christmas. He walked in the Western Illinois University Fallen Soldier 5K run one year.  He even had a feature article in the local newspaper—complete with picture and headline that encouraged the adoptions of shelter pets.

Most importantly, he like to snuggle and give kisses (which he got every day after work). I think he loved nothing better than burrowing under the covers and getting right up against me when we went to bed. It was his safe place. There is nothing he loved more in the world than this forty year old Star Wars blanket, that for some reason I never threw away as an adult. He was a world class pillow fort engineer (I have the pictures to prove some of his projects). His day job was to sit on an old porch chair that matched no other piece of furniture in the house—except for the fact it was dog friendly (all of our dogs loved this chair over the years). He would sit on top of the back of that big old fluffy chair and survey the park. Sounding the alarms for all to know when the mailman was breaching the walls.

He knew how to find the sunny spot on the porch to bathe in on summer afternoon and he liked watching me mow the yard from that same window on the porch.  Charlie was also a big fan of laying on top of the back of the couch when it was time to watch football on Sunday. Speaking of Sundays, they were his favorite days because I was with him all day long. We would lay around, take a walk, eat, and watch TV together (which in the end is all he cared about). Charlie also liked poker night when we hosted. He would lay under the table and maybe get a stray cheese puff come his way, or sometimes just jump up on an open chair to see who was winning. He was a big fan of the deck, where he had his own chair where we smoked cigars and listened to Frank Sinatra, while solving all the world’s problems.

The last several nights the house seems completely empty to me. It still looks like some sort of dog hospice/elder care facility from all his recent medical issues. It is eerily quiet. I find myself looking at the radar to see if it is ok to take a walk, or waiting for him to sneak under the blanket and cuddle up beside me at the end of the night. I looked for him at my feet under the desk where he used to lay when I brought work home only to find an empty blanket. The last month has been hard to watch him deteriorate so fast so I know this sadness is selfish.

I have tried to think of all those good times and the thousands of pictures I took of him over the years. I think how he loved his many dog sitters (and I believe they loved him too). He was one of a kind. He was way more than a dog. He was a companion, a friend, a confidant, and a roommate. He was family and I miss him deeply. I know that all dogs are special but he was next level. I also know there will never be another like Charlie. This loss will be with me for a long time. He probably saved my life.

In the end Charlie was under that old torn and tattered Star Wars blanket that he loved so much when he finally left this world---his Heaven on earth---at peace. A dog and his blanket. 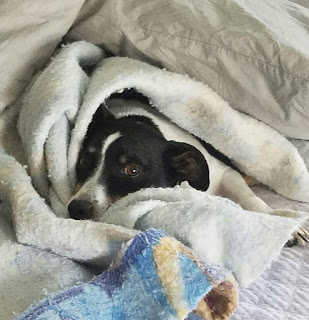